bysanusi
in Egbon and Mazi
1

Ah. Mazi, why are you sitting down there on your own with your hand on your cheek like that? Did somebody die?

Hmm. Egbon, I just siddon here dey think. Me and my madam get small quarrel. Month end don reach, na how to spend the small money be problem.

Oh, na so marriage be o. You go dey manage am dey go like that. Make I join you siddon for here. Me and my son, Femi, were just talking on phone. He just passed out of NYSC. Job wahala and all that.

Chineke. It’s to find a good job that will be the challenge. One governor said they should take it to the next level by learning a new skill like dentistry assistant, or carpentry. Everybody knows there is no hope.

Okoro, we will find hope wherever it is o. He will join his elder brother, Gbenga, at the barbing salon till he finds something better. He knows book very well, he’ll survive.

Speaking of people who know book, did you hear about the 3 Nigerians that topped one world exam like that in England? The thing is just making me smile. Chei, Chinaza nwam.

Nigerians are always smart when they’re not in the country. I don’t know why they can’t come back and use that sense here. Ehen… wetin you think about the 50 African-Americans that are tracing their roots in Benin City?

Ngwanu, they should trace as much as they like. It’s Benin they all ran to because they have to be royalty. When they finally find it, will they stay?

Some stay, some don’t. Na so life be. But it will be better if my brother the VP is not busy talking to oyibo about kidnapping. Let us know where this craw-craw is scratching us. This moment he’ll say it is serious; the other he’ll say it’s not. He should stay away from planes and face the extreme poverty that was making him sleepless.

And on the issue of planes, is it not how Wole Soyinka was made to stand up by a young man because he was occupying his seat? What is happening to us in this country? No single respect again. Tufiakwa. Chukwu a jụ!

Mazi, who trained them? Is it not us? Maybe we are doing a bad job? Abi is it internet that is teaching them all this? Or maybe they are just angry with us ni for not doing better. Things are harder for them compared to our time. We spoiled all the country for them. Don’t you think so?

Na true o, job used to chase people like Usain Bolt. But now a retired General is worth 1.2 billion dollars many years after he retired, yet some children cannot go to school. Others cannot find jobs. Senators are earning up 15 million naira monthly. Are you not seeing?

As if that is not enough, they will still steal more money. These days they steal even cars, tables and bedsheets. Ask Ihedioha your brother. He has been calling on the past government staff to return what they stole. He said he will use dragon style to recover Imo state property. Which one is dragon style again? Is it how you people do in Imo state? Haaa.

Haha. No be only dragon style, na Jackie Chan and monkey shadow. And what is it with Nigerian states adopting a particular religion, ehn? I thought we’re in a secular country.

Are you talking about Governor Wike and JNI? Me I don’t even understand this country and religion. A pastor is accused of molesting church members and his church members are defending him, justifying his actions. We’re saying we need defenders in Super Eagles; they’re busy showing up in churches. Hmmm. You see why I like Ifa?

Or Amadioha. They will just do their jobs. No dogon turanci. Egbon, I hear say Ifa dey see the future. You fit help me ask am if Super Eagles go win ACFON? Make we know o. Omeruo and Iwobi are my boys!

Hahaha. Mazi, our boys did well in their first two matches nau. At least we won’t need to be doing permutations and calculations to qualify this time. We have qualified for round of 16 before other teams. That’s progress.

So your answer is no then. Ifa cannot help me find out. I will report you to Ohaneze Ndigbo. Those ones.

And I will report you to Afenifere and they will confront you on this matter after which they will go silent again. Confront your wife first.

Later na, Mazi, make I think small like you.

Thank you for reading. I hope you enjoyed it? New episodes of this column will be updated every Saturday on this blog. Now, kindly share with your friends, family, and colleagues.

Tk And Kenny Everyday’s Hustle: Carpenters With A Difference. 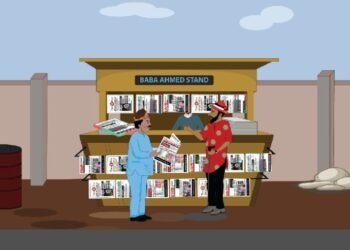