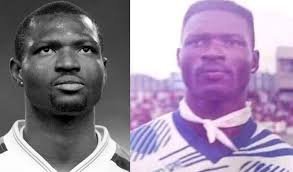 Former Nigeria international Ajibade Babalade passed away in Ibadan, Oyo State on Friday at age 48 as a result of cardiac arrest. The Nigeria Football Federation confirmed Babalade’s death on their verified Twitter handle. as they wrote: “We are sad to announce the shock demise of former Super Eagles defender Ajibade Babalade. “Babalade died of cardiac arrest today in Ibadan. May his gentle soul Rest In Peace. Our prayers are with his family.”

Babalade made his Super Eagles debut in 1990 had 13 appearances before retiring from international football in 1998. He was a member of the Eagles squad that finished third at the 1992 AFCON in Senegal. In 1996 he captained Shooting Stars to the final of the CAF Champions League where they lost to Zamalek on penalties.

Other clubs he played for include Iwuanyanwu Nationale  (Heartland), stationery Stores, and Sturm Graz of Switzerland. The year 2020 will be remembered as the year Nigeria lost many of their players, it is not up to a week after the Nigerian Football Federation wrote on the sudden death of one of their goal keepers in senegal now this. May his gentle soul rest in peace. Amen.