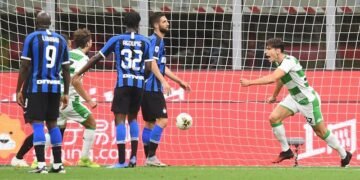 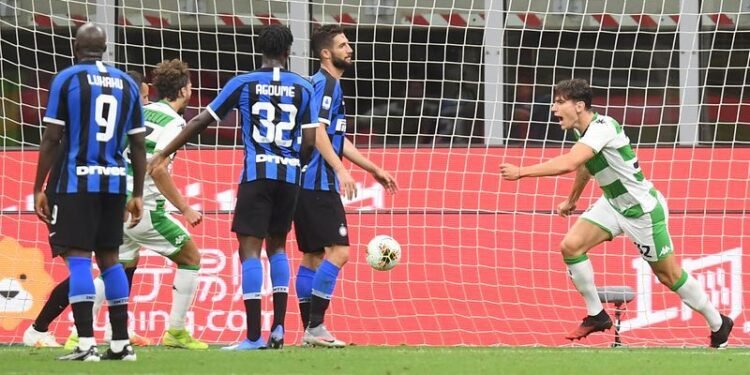 No More Hope for Inter Milan following their 3-3 Draw

Former Chelsea and Manchester striker Romelu Lukaku scored his 25th goal of the season as Inter Milan drew with Sassuolo in a six-goal thriller. Francesco Caputo opened the scoring very early into the first half of the game before Lukaku gave the equalizer to level scores for Inter Milan from the penalty box.

Not long from then, the second goal for Inter came as Alexis Sanchez set up Cristiano Biraghi to put Inter ahead, they went into the first half with Inter leading the contest. They resumed and substitute Ashley Young conceded a penalty which Domenico Berardi scored to bring Sassuolo back into the game.ahead.

one Inter Milan player Skriniar with Borja Valero and Sassuolo’s Giangiacomo Magnani already in the score sheet to make scores to be 2-2. Inter’s Roberto Gagliardini hit the crossbar from close range and former Manchester United and Chelsae striker Romelu Lukaku also had a goal disallowed for offside in an entertaining match. Inter took charge again to make the scores 3-2 but surprisingly in the last minute the game the equalizer for Sassuolo came.

Six former Premier League players featured for Antonio Conte’s Inter during the game. Their slim title hopes are probably now over, sitting eight points behind leaders Juventus in third and with Lazio losing to Atalanta 3-2.