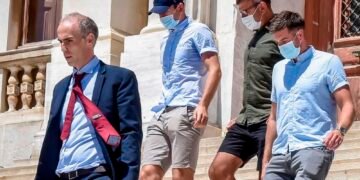 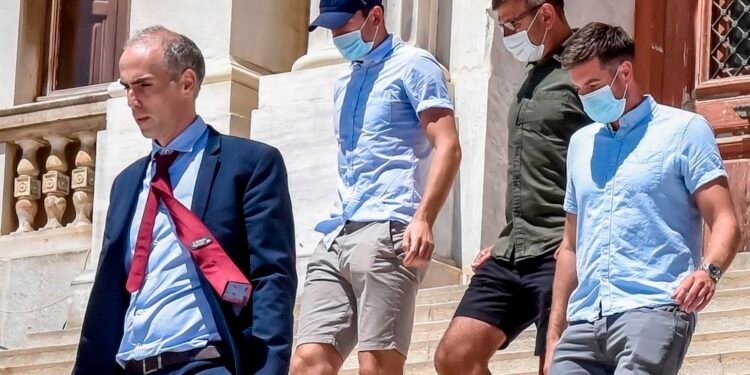 Manchester United football team captain Harry Maguire (2nd L) leaves a courthouse on the Greek island of Syros, the administrative hub of the Cycladic island group that includes Mykonos on August 22, 2020. - Maguire was released from Greek police custody on August 22, 2020, TV footage showed, pending a hearing on assault charges on the neighbouring island of Mykonos. The ¬£80 million (88 million euros) defender was arrested late on August 20, after what Greek police described as an "altercation" between two groups of British tourists on Mykonos. (Photo by EUROKINISSI / AFP) (Photo by EUROKINISSI/AFP via Getty Images)

Harry Maguire Guilty and given Sentence

Manchester United captain Harry Maguire has been found guilty of the three-count charge, he is found guilty of aggravated assault, resisting arrest and repeated attempts to bribe a police officer after his recent arrest in Greece. The 27-year-old Manchester United skipper was arrested alongside his brother on Thursday, August 20, with initial reports suggesting he engaged in a fight which resulted in him assaulting a police officer.

The England international was subsequently slapped with a 21-month suspended prison sentence. According to reports from Sky Sports, the sentence was suspended because this was Maguire’s first offence and the charges were misdemeanours. He was convicted of all charges against him by a court on the island of Syros, Greece.

According to one of the policeman, he alleged that while at the police station, Harry Maguire said: “Do you know who I am? I am the captain of Manchester United. I am very rich. I can give you money. I can pay you. Please let us go.” His colleague added that Maguire had said to him: “Please, let me go. I am very rich. I can pay. I am the leader of Manchester United.”

The defence, however, argued that this request may have been lost in translation and suggested Maguire may have been asking to pay a “fine” to be released. In response to the charge of insult, Harry Maguire’s lawyer said he said things which did not imply diminished professionalism by the police officers.

The United defender was not present in the court but the trial went on regardless but he said: “I remain strong and confident regarding our innocence in this matter – if anything myself, family and friends are the victims,” Maguire said. A lawyer who represented the prosecution told Sky the families of the victims were still waiting for an apology from Maguire’s team.

BBNaija 2020: “I was happy she said yes”, Praise Talks About Older Fiancee, Angry Neo Voted Him For Eviction

Fani Kayode’s Short Fuse: What Is The Worth Of A Nigerian Journalist?