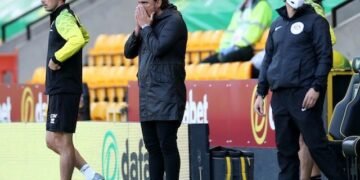 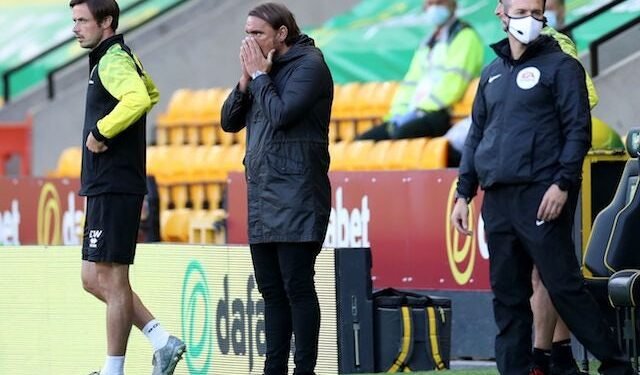 Daniel Farke says his side “won’t give up” despite it “not being realistic” for Norwich to escape relegation after suffering a third straight Premier League defeat at home to Everton. Daniel Farke and his troops remain rooted to the bottom of the table, six points adrift of safety, but they retain hope as the three sides above them West Ham, Bournemouth and Aston Villa all failed to win on Tuesday and Wednesday respectively.

Norwich will be playing Manchester United in FA Cup quarter-final on Saturday, and the manager has come out to say he is not putting blame on anyone concerning their performance in the league. “I can’t accuse the lads at all today,” Daniel Farke said, he also said” “I can just praise the workload, the togetherness.

“In terms of attitude, we showed organisation and I can just give compliments. We don’t give up, for sure. We have seven games and have a chance. “It’s not realistic for us to win the FA Cup or stay in the league. When you wear this yellow shirt, you have responsibility and big pride. As long as there is a chance, we won’t give up.”

The goalcame from Italian young star Michael Keane in the second half of the game, the Canaries could have broken the deadlock in the first half but Onel Hernandez’s deflected shot bobbled off the foot of the post. Dominic Calvert-Lewin forced Canaries goalkeeper Tim Krul into a couple of saves, with victory for Carlo Ancelotti’s side lifting them up to 10th in the table.