Mankind is blessed with many plants among which the oil palm tree comes out on top. This tree is widely grown in Central America, Africa, and Asia (especially in Malaysia and Indonesia). Oil palm tree with the scientific name, elaeis guineensis, is considered the richest tree on earth. It has all its body parts useful to man. And it is one tree we can’t but enjoy its various usefulness.

In Nigeria, the oil palm tree is widely grown in the rainforest vegetation zone of the country. It is grown in states such as Edo, Delta, Bayelsa, Rivers, Ogun, Ondo, Imo, Anambra and so on. It is referred to as ‘ope’ by the Yoruba people of Southwest Nigeria while the Igbo people of Southeast refer to palm oil as ‘akwu’.

The oil palm tree is of economic importance and it is classified as a cash crop. The palm tree seedling which is planted takes up to four years to grow into maturity. An oil palm tree can produce for 30 years while reaching up to 20-30m in height. The monocotyledonous plant consists of leaves (palm fronds), fruits (palm fruits), branches, stem, and root.

The plant is considered a multipurpose plant because of the numerous benefits derived from it. Here are the parts of an oil palm tree and its importance:

Palm leaves: The palm leaves are also known as palm fronds. It has been used for roofing buildings especially huts in rural areas. Broom, which is also a household object used for sweeping is gotten from the leaves. The frond is also used for religious purposes as Christians use it as a symbol during the Palm Sunday. The traditional worshippers make use of the palm fronds to decorate their place of worship (shrine).

Stem: This is used as firewood when it is cut down and dried. The wood can also be pressed to extract oils for soft drinks, cooking, preservative, syrup, and soap. The wood fibers are used in hats, parquets flooring, and hammocks and the wood itself is used to construct wicker furniture. The palm tree chips are often used to fuel the factories that refine these products.

Palm tree: Some palm tree species such as palmyra, date palms also produce palm wine which is a sweet, tasty drink that is gotten from the tree sap. Palm wine is an important local drink in Nigeria and it has been found to have several benefits.

It is not a mere saying that the oil palm tree is the most economical and richest plant on earth. Its wide range of uses and benefits is a gift of nature to mankind. 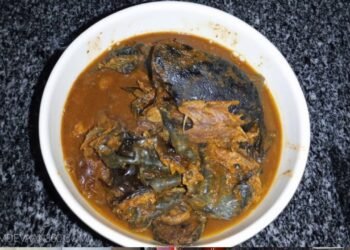 Ogolale is The No 1 Sumptuous Niger Delta Meal