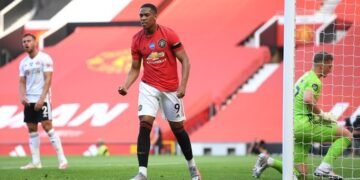 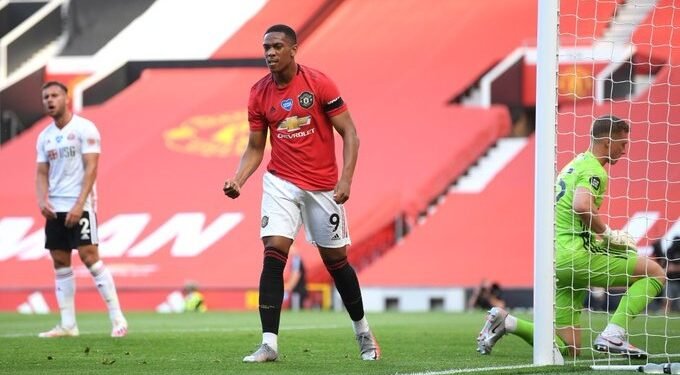 France winger Anthony Martial of Manchester United has broken record as he scored Manchester’s first hat-trick in more than seven years since the departure of former manager Sir Alex Ferguson no United player has scored a hat-trick, the last player to score a hat-trick in United jersey is Robin Van Persie.

Ole Gunnar Solskjaer’s men eased past Sheffield United at Old Trafford last night 3-0 and all the goals were scored by the Franch winger who is now Manchester United striker Anthony Martial. The result moves United to within two points of fourth-placed Chelsea, who entertain Manchester City on Thursday.

However, for Chris Wilder’s visitors, it was another disappointing day. The Blades have now picked up just one point from three games since the resumption and are yet to score. Manchester United’s decision to sell Romelu Lukaku and Alexis Sanchez to Inter Milan in August and not buy an attacking replacement has been a talking point for most of the season.

The introduction of Bruno Fernandes who was signed in January transfer has helped Anthony Martial very well. In seven league games since Fernandes arrived from Sporting Lisbon for £47m, Martial has scored six goals. He has now scored 19 goals in all competition this season. This is his best return in five years at Old Trafford.

The attacker is known for not smiling managed to smile after scoring his third goal, his delight obvious after previously scoring twice in a game for United five times in five years without ever going on to complete his treble.