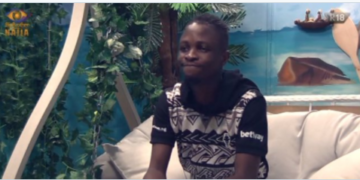 Laycon during Friday’s diary session has identified who he wants to be like someday. He was in the diary room for his weekly session with Biggie and he was asked if he has anything to share and he mentioned his hurts.

According to him, he was very hurt that he narrowly lost the game that would have given him a slot at the Head of House in the BBNaiha house.

During the game on Monday, he was the last housemate to play the game and he had a close shave with winning and hijacking the seat from Erica who had the highest point at that time.

Laycon needed just five points to finish the game and emerge the seventh HoH, but luck was against him when he rolled six twice on the die and later rolled one which took him to the point where he was to start the game all over again.

He told Biggie that he felt hurt about the loss and then Biggie gave him the advice that cheered him up. He told him not to worry about things that are out of bis control. Interesting right?

On hearing that, Laycon said Biggie always knows the right things to say and that he would like to be like him someday.

Please Laycon, are you sure you want to be like Biggie because the Biggie we know can not be trusted. But let’s ask you, which part of him do you want to emulate?