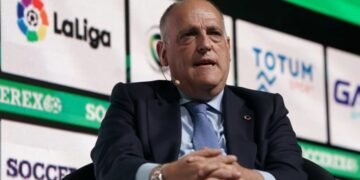 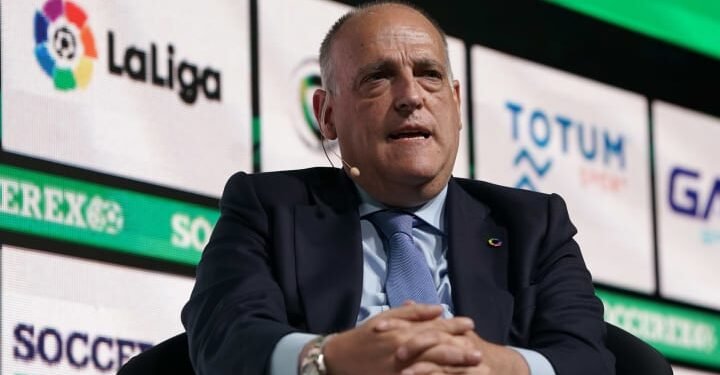 La Liga president Javier Tebas has come out to say he is “ready” for the exit of Lionel Messi. He made the statement while criticising English Premier League side Manchester City who is most likely to sign him.

Lionel Messi submitted a transfer request in August at Barcelona saying he wanted to leave. A club which he has been playing for since he was 13-year-old. The request was however turned down after they refused to sanction his release.

The forward had fallen out with Josep Maria Bartomeu, who subsequently resigned as Barca president in October. La Liga president Javier Tebas wants Messi to stay in Spain but feels La Liga would cope without him. He argued that the competition had continued to thrive following Neymar’s 2017 departure from Barcelona to Paris St-Germain, and Cristiano Ronaldo’s 2018 move from Real Madrid to Juventus.

“We would prefer Messi to stay in La Liga but Ronaldo and Neymar left and we have not noticed any difference,” Tebas said. “We are ready.”

The six-time world player of the year winner would be available on a free transfer at the end of this season. The La Liga president indicated that Messi’s likeliest Premier League destination will Man City if he wants to go to England.

La Liga president has repeatedly criticised City, having previously made numerous allegations about their structure, including accusing them of financial doping, before they were cleared of serious FFP breaches by the Court of Arbitration for Sport in July.

The La Liga president said: “It seems the only club in Premier League that talks about registering Messi is Manchester City, who compete outside the rules. I am not the only one saying this.” “I am not too worried about them. I have criticised what they do so many times. Doing it one more time makes no difference.” “City is neither affected by Covid nor pandemics or anything because they are financed differently and it is impossible to fight against that.”

Manchester City did not respond to Tebas’ comments, although it is understood they are wrestling with the financial impact of the coronavirus pandemic limiting manager Pep Guardiola to a net spend of £31m during the most recent transfer window.

Tebas was speaking at the end of an hour-long presentation to outline the financial state of La Liga following the close of the transfer window on 5 October. The most particular event he spoke about was the situation in Barcelona. He said had reduced their budget by 43%. In July, the club revealed their debt had more than doubled from 217m euros (£194.5m) to 488m euros (£437.4m), amid annual losses of 97m euros (£86.9m).

One journalist questioned whether it was possible Barca might even have to go into administration, although Tebas rejected this. “Barcelona are not considering insolvency proceedings,” he said.

“Their debt might be slightly larger but they were perfectly solvent pre-Covid. But Covid has come along and taken away a lot of revenue. They are not so capable of repaying the debt, so their salary volume has to go down. “That is the essential factor for most clubs. It is not because they were mismanaged earlier.”