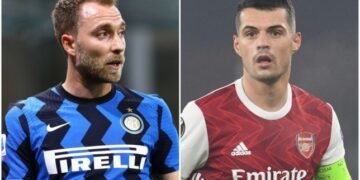 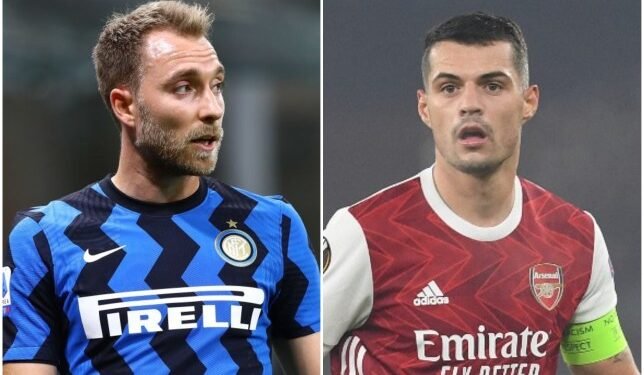 According to recent reports in the English Premier League, Arsenal is currently in talks to swap Eriksen with Granit Xhaka. The pair have sparked a war of words in the media with the two midfielders swapping clubs.

Former Tottenham midfielder only made 12 appearances for Inter Milan since joining them. He is yet to register a goal or assist in the 2020-21 season.

Inter Milan had earlier stated they will return the £17million signing. Arsenal is now coming for the rescue as they are up for swap. They are willing to swap the player for Granit Xhaka. Conte has been looking for a way to bring N’Golo Kante as a defensive midfielder but has failed to do so. Xhaka could be the perfect option now.

Granit Xhaka is seen as a good alternative and Inter may be able to convince the Swiss star to leave. Considering the signing of Thomas Partey Xhaka is not a needed player now at Emirate. It will be to his best interest to leave.

No bid has been launched yet and Eriksen is still thought to have time to improve before Inter commits to a sale. But if the deal finally pulls through the ex-Spurs star will return to the North London side. He will join the list of players to play for the two North London clubs.

The likes of Pat Jennings, Emmanuel Adebayor and Sol Campbell are the first on the list. Erikson has earlier stated he is not happy with how things are playing out. He said: “This isn’t what I dreamt of.

“All players want to play as much as possible, but the coach decides who gets to go on the pitch.”

“It is a strange situation, as the fans want to see me playing more and so would I. But the coach has different ideas and as a player I have to respect that.”

He aslo said: “I don’t want to sit on the bench for the whole season. I hope this isn’t the coach’s or the club’s intention.”