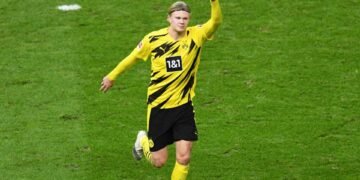 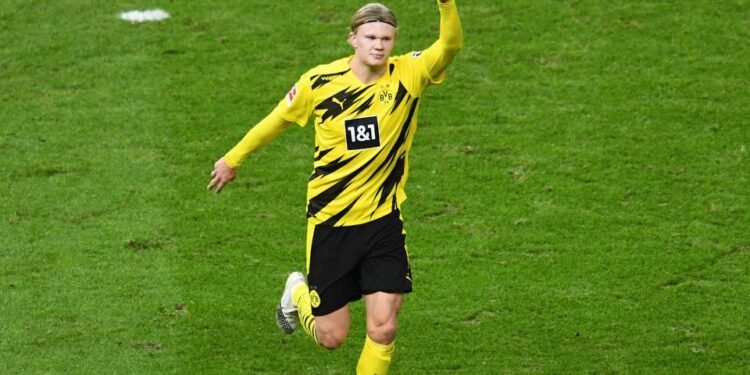 New Fifa Golden Boy award winner Erling Braut Haaland scored four goals as his side Borussia Dortmund recovered from a goal down to humiliate Hertha Berlin 5-2. The scores reduced the gap to Bundesliga leaders Bayern Munich as Bayern drew with Werder Bremen in the early hours of the day.

The 20-year-old Erling Braut Haaland scored a 15-minute hat-trick as Dortmund moved second in the German Bundesliga table with one point behind Bayern Munich. Raphael Guerreiro added a fourth before Haaland scored his fourth of the day. Brazilian winger Matheus Cunha scored the only two goals for his side Hertha Berlin, he scored in the both halves but the goals were not enough to deny Dortmond the victory.

Manager Lucien Favre gave a senior debut to Youssoufa Moukoko one day after his 16th birthday to become the youngest person to ever play a professional match in Germany. The Cameroon-born German youth international has so far scored 141 goals in his 88 youth matches appearances for the club, he was introduced into the game five minutes to go.

Erling Braut Haaland levelled two minutes into the second half, sweeping in Emre Can’s pass, and raced clear to add his second two minutes later. He rounded the goalkeeper for his third while his fourth arrived from a Jude Bellingham assist after Guerreiro’s contribution. Cunha had converted a 79th-minute penalty to make it 4-2, but Dortmund scored swiftly after the restart.

Erling Braut Haaland who won the Golden Boy award for the year 2020 has hit 10 goals in his past six games in all competitions for Dortmund. He has also scored 21 times in 17 matches for club and country this season. According to Erling Braut Haaland when asked about the new young lad, he said “I would love to play alongside him.”

Erling Braut Haaland also said: “I think he’s the biggest talent in the world right now. He’s 16 years and one day old, that’s amazing. He has a big career ahead of him. We’re lucky to have him.”