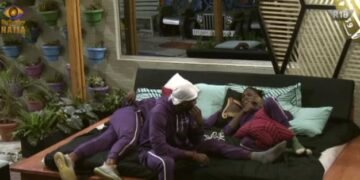 Laycon and Prince have thrown shade at the relationship between Brighto and Wathoni. There was a guys side talk among Laycon, Prince, and Neo, and they took time to analyse some relationships in the BBNaija lockdown house.

According to Laycon, Wathoni put too much effort into getting herself Brighto, and Prince on the other hand wondered if Wathoni is the one dating Brighto or they are both dating each other.

Laycon added a funny information when he said Wathoni did all she could to get Brighto’s attention as she always calls his name several times so that he could look towards her.

He added that even if Brighto says “A,B,C”, Wathoni will laugh as if it was something very funny that he said.

On his part, Prince said he is not sure that Brigtho has feeling s for Wathoni and thinks what they both have is a situationship. He added that all the ships I the house can not be referred to as relationships aunt situationships.

Meanwhile, Neo seems to have a different judgment of the situation because he feels both Laycon and Prince are not in the relationship with Wathoni and Brighto, so they can not be a true judge of their feelings and emotions.

He told them that Brighto is not a man who shows too many emotions on his face and he thinks he likes Wathoni.

Neo also informed them that there is no triangle between Dorathy, Wathoni, and Brighto. He told them that Dorathy is not in the picture, but Laycon stressed that that happened because Dorothy chose to remove herself from the scene.