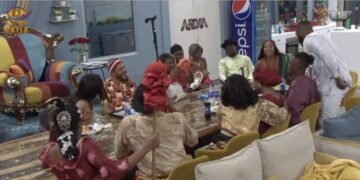 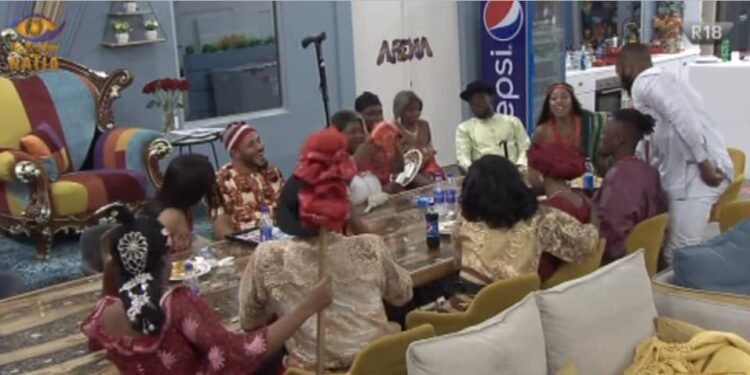 After hearing several touching stories during their wager, the housemates work up in a solemn and humbling mood.Workouts were over and the BBNaija 2020 housemates went about their usual businesses.

Erica had an episode with Kiddwaya after the workout sessions while having breakfast and some would term it a break up although they never expressed that they were dating. Erica was in tears while she spoke to Kiddwaya asking him if he respected her or saw her as a special person in his life. This conversation ended with Kiddwaya suggesting that they revert to the friendship they had and just remain close. This is what many tagged the Kiddwaya and Erica break up.

They had their diary sessions today and Nengi who was the first to go in said she can’t sing nor dance and that’s why she had to apologize to Tiwa Savage for her below-par performance of Tiwa Savage’s song. She also said during the diary session that Prince and Lucy were the bad losers in the house.

Brighto has put a name to the news of a BBNaija fake housemate going round about the lockdown house. Although he said he could not fathom who it would be at first he eventually mentioned Lucy as the possible fake housemate.

Vee, Trikytee, Brighto and Wathoni gave Biggie a hint that some of the BBnaija 2020 housemates were not taking their showers to avoid using the blistering cold water, this was their way of cutting corners with Biggie’s punishment.

Dorathy asked Biggie to give her advice concerning the feelings she has for Brighto. A little back story to that, Dorathy found herself in a second love triangle following that between her, Nengi and Ozo. The new love triangle is between her, Brighto and Wathoni though Brighto is definitely leaning more towards Wathoni, breaking Dorathy’s heart piece by piece. Now she finds herself in a dilemma between focusing on the prize money and working on her feelings for Brighto.

Kiddwaya has won a special gift from Biggie after winning this week’s Friday arena games. The former winners of the game usually get an opportunity to be pampered by the rest of the house for a week but for Kiddwaya he would be getting a special gift from biggie on Monday.

Finally, Biggie has announced the wager results and the housemates won this weeks wager which is the second time they are winning, both times were under Ozo’s reign as head of house. Biggie applauded them for coming up with powerful stories during their presentations. Biggie said he recognized the power in their individual experiences and stories.