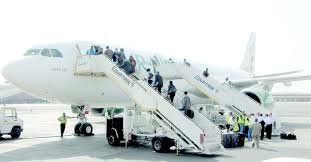 The Nigerian Airspace Management Authority have been warned by the unions in the aviation industry not to go ahead with their proposed plan to pay incomplete salaries. According to the unions, the pay cut if it happens will result in dire consequences for the industry.

Included amongst the unions giving the warnings are:

The letter which was supported by key personnel from all the unions involved, the groups informed NAMA that they are aware of the planned pay cut and they will definitely not allow that to happen. They advised the authority management to halt all activities relating to the planned pay cut as going ahead with it will result in gross embarrassment across the sector.

However, they added that they are fully in support of the management taking steps to address issues regarding staff payment and welfare. They are of the opinion however that their support to the management to go ahead with the pay cut does not include alteration of workers salary.

The Unions concluded by ordering NAMA to pay up all salaries and entitlements as they are due to all the members before the 29th day of June 2020. Failure to do so by NAMA will result in more industrial action from the unions involved.