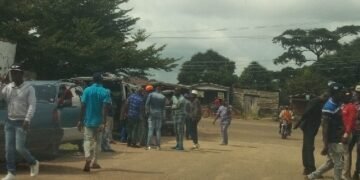 Amidst the political drama playing out in Ondo state, some persons suspected to be hoodlums have invaded the state house of assembly.

It was gathered that the hoodlums converged on the assembly to prevent anti-impeachment lawmakers from gaining access to the complex.

Everyevery.ng gathered that the thugs who are suspected to be members of the National Union of Road Transport Workers, NURTW were stationed at strategic locations in the assembly’s complex.

You will recall that the suspension of three lawmakers’ was recently reversed by an Akure high court.

The court also ordered the Ondo State House of Assembly to immediately pay all the entitlements of the affected lawmakers and also pay 5 million naira compensation to each of them.

The suspended lawmakers are Deputy-Minority Leader and Member representing Ondo West constituency 1, Tomide Akinribido of the Zenith Labour Party, ZLP, the Deputy Speaker of the house, Iroju Ogundeji, and another member of the House, Adewale Williams.