This week, we decided to bring you a movie ‘Hire A Woman’ that starred the Stargirl (pun intended) and BBNaija Lockdown housemate, Erica Nlewedim. Hire a woman is a typical love story that follows a young nerdy man who in a bid to get back at his ex-girlfriend takes extreme measures. What he did not know is that he would find love in the most unlikely place or should we say, person.

Erica stars in this movie as Nifemi and in this review, we would be rating her performance and that of the other cast as well as the Pros and cons of the overall movie production. Let’s start with the Pros

This is notable as the best part of this movie production. The costumier was very intentional about making the casts look their part. The part of young adults who went their separate ways after university and a trying to navigate life, work and love. With their outfits, there was an interception of adults who had jobs. The makeup was appropriate too, nothing too loud or out of place. another part of the costuming was the fact that they were very intentional about reflecting the tropical beach outfits when need be especially when the cast was at the beach and switching to African attires when they were participating in the cultural events. The costuming was almost perfect save for some scenes which we will discuss in the Cons.

There could not have been a better selection for the roles in this movie. The allotted age range for the roles being played reflected in the movie. We did not have the case of a 40+ man playing the role of a man in his twenties as we have often seen in times past. One thing that could have been better was the selection of a more comic character in place of Emeka(Alexx Ekubo), he didn’t do a terrible job though but it could have been better.

This was the major setback in this movie. One thing one could notice from the entire movie was the absence of a master shot. Most scenes were having just close shot and that may not completely deliver the message of the scene. The camera shots were a bit shaky in some scenes and haphazardly done in others.
One scene that stood out in this sense was when Nifemi (Erica Nlewedim) had to take a call in the middle of the bonfire and some parts of the production crew were in her frame with the lights and camera. There were obviously not sleek enough because they made an appearance but that scene could have been redone to avoid that slip-up. This same Nifemi claimed that her friend sent her a message after her phone fully rang for about 15 seconds. In another part, the dissolve from the swimming scene to the bonfire scene was tacky. That kind of transition has not been used for years. Emeka’s attempts at humour were also forced and it was obvious.

While the casting director did a good job with picking actors that would look like the roles they were supposed to play, some of the characters did a lousy job at their role delivery. Jane (Ifu Enada) did not max out her skills while delivery her role same with her fiancé in the movie(Mike Godson). Their delivery was stiff and honestly not enjoyable to watch. This is the part where we talk about Erica.
Erica did a good job especially for an actress who is not as seasoned as most save for the scene where she was sleeping on Jide’s shoulder and we could see her eyes partly opened and trying not to blink so much. Then the final beach scene where Nifemi and Jide had a kiss looked like a punishment. See it for yourself

Another part of the movie that did not do it was the song selection. The songs in some scenes were not so suitable for the scenes. It seemed like the music director was stuck in the tropical part of the movie because most of the songs were tropical.

Overall, this movie would be getting a 7/10 and if you haven’t seen it you should. Let us know what you think of it and if you would be seeing this movie as well. 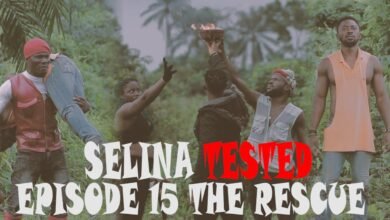 1 week ago
Facebook Twitter WhatsApp Telegram Line
Back to top button
Close
We use cookies on our website to give you the most relevant experience by remembering your preferences and repeat visits. By clicking “Accept All”, you consent to the use of ALL the cookies. However, you may visit "Cookie Settings" to provide a controlled consent.
Cookie SettingsAccept All
Manage consent

This website uses cookies to improve your experience while you navigate through the website. Out of these, the cookies that are categorized as necessary are stored on your browser as they are essential for the working of basic functionalities of the website. We also use third-party cookies that help us analyze and understand how you use this website. These cookies will be stored in your browser only with your consent. You also have the option to opt-out of these cookies. But opting out of some of these cookies may affect your browsing experience.
Necessary Always Enabled
Necessary cookies are absolutely essential for the website to function properly. These cookies ensure basic functionalities and security features of the website, anonymously.
Functional
Functional cookies help to perform certain functionalities like sharing the content of the website on social media platforms, collect feedbacks, and other third-party features.
Performance
Performance cookies are used to understand and analyze the key performance indexes of the website which helps in delivering a better user experience for the visitors.
Analytics
Analytical cookies are used to understand how visitors interact with the website. These cookies help provide information on metrics the number of visitors, bounce rate, traffic source, etc.
Advertisement
Advertisement cookies are used to provide visitors with relevant ads and marketing campaigns. These cookies track visitors across websites and collect information to provide customized ads.
Others
Other uncategorized cookies are those that are being analyzed and have not been classified into a category as yet.
SAVE & ACCEPT
Close
Close
Continue in browser
Hire A Woman Full Movie Review
To install tap Add to Home Screen
Add to Home Screen
Hire A Woman Full Movie Review
EveryEvery
Install
Add Hire A Woman Full Movie Review to Home Screen
Close

For an optimized experience on mobile, add Hire A Woman Full Movie Review shortcut to your mobile device's home screen