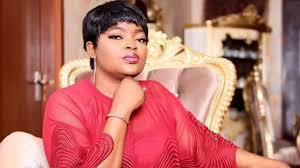 Nigerian actress, Funke Akindele has commented on a death prophesy given to her by a stranger. The popular actress shocked her fans with her reply and the death prophesy.

The death prophesy was given to her by an online prophet who advised her against going to a surgery.

According to the online prophet, God told him that she would not make it if she undergoes surgery.

Funke was advised on Twitter by the prophet that it would be better for her obey than be sorry.

The prophet wrote, “@funkeakindele Good morning ma. Jesus loves u. Please don’t be offended for I have a message for u. Do not under go any surgery for the Lord said u will not make it. To obey is better than sacrifice 1sam. 15v22 and Jer. 7v23. God bless u as u obey. Thanks“

Funke Akindele’s response to the death prophesy was however shocking.

She simply told the prophet that the prophesy is coming to her late because she has don it already.

Singer, Dolly Parton Gives Reason For Not Having Child