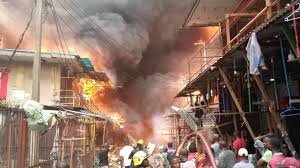 Sunday, January 5th 2020 was a gloomy day in Oyo town, Oyo state as it was reported that the over 400 years historical market, Oja Akesan got burnt with goods worth millions of naira destroyed in the inferno.

Though, the cause or causes of the inferno was not stated but there was another angle to the incident whereby angry youths in the ancient town destroyed property within the compound of the fire service station which was about 20 metres away from where the incident happened.

There were fire outbreak in Ibadan, Lagos, Akure among other areas and the question on the lips of so many people is, Why is the record of fire outbreak so high this season?

In what seems like an answer to the question, the General Overseer of the Redeemed Christian Church Of God, pastor Enoch Adeboye said that on the international scene, Nigeria inclusive, there would be fire outbreaks , flood , storms , earthquakes, volcanoes among others.

According to him, except for God’s divine intervention through prayers, there shall be many fire outbreak in the country.

However, it is needless to debate if his prophesy was right or wrong but it is very important to look into how so many Nigerians have been affected by fire outbreak which could either be blamed on human errors or Natural disaster considering the weather.

At the same time, it is highly imperative to critically take a look into how the federal fire service and the state fire services across the nation have faired in the discharge of their duties, not only that, it is also important to consider how equipped the fire fighters in Nigeria are.

Just like every other natural disasters, fire outbreak deserves quick response and to contain it, there is the need for people that would respond to have modern and functional fire fighting equipments.

Now, the question is, can we absolutely say the fire service management have been fair enough to employ workers without making provisions for functional equipments or Government at different level should shoulder the blame of not employing enough staff into the service of the fire service commission or better still not providing the needed equipments.

Putting prophesies side by side with the lapses on the part of either the fire service management or the federal and state governments, it is basically important to there is no point blaming God for Hunan’s failure because he won’t play the role of human in either preventing or containing fire outbreak.

Towards the end of the year 2019, The Federal Fire Service (FFS) said it had established six additional zonal offices to boost service delivery across the country.

The Comptroller-General of the service Liman Ibrahim announced this at a press briefing in Abuja.

According to Liman, the essence of the spread is to deliver quality fire fighting services, improve the response time to emergencies and complement efforts of the state fire services.

He listed the zones to include Zone G which is expected to cater for Niger, Kogi and Kwara, while Zone H would cater for Sokoto, Zamfara and Kebbi.

Others included Zone I with headquarters in Yola, to cater for Adamawa, Taraba and Gombe, while Zone J would cater for Abia and Imo.

Ibrahim said that the zonal headquarters would be equipped with firefighting trucks while experienced firemen would be deployed to man them.

Others included Zone K, expected to cover Delta, Edo and Bayelsa Zone L would cater for Osun, Ondo and Ekiti.

He said that the federal government was focused on strengthening the state fire services for effectiveness and efficiency, adding that the FFS was already reaching out to state governors to secure their support and encouragement.

As much as it is important to respect the efficacy of prayers, it is key to also draw attention to the lapses on Government’s part and the need to get it fixed as and when due to put an end to the incessant infernos in the country.