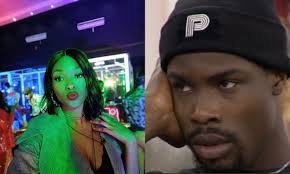 Vee and Neo have had a rollercoaster relationship in the Lockdown house. They have broken up a number of times from minor fights that always centre around food and other trivial issues.
In the early hours of this morning, Vee snobbed Neo when he begged her to let him back into her life as a lover. She had already warned Neo not to come back begging after hurling hurtful words at her on Saturday.

After resolving not to beg Vee regardless of what happens, Neo went back on his words and said he’ll do anything to have her back and apologized profusely for his misbehaviour after the Saturday night party. He said, “Please I need you back, I’ll do anything to have you back as my girlfriend.
“I miss you asking me to do things for you, I miss us.”

The two broke up after a major fight that led to Vee moving out of their shared bed and saying she was absolutely done with the relationship.They made up a few hours after their fight but not as lovers though.

Vee insisted that she would like for them to remain just friends and if there was any hope of them remaining friends it will have to be when they leave the house.
She meant every word she said because she shunned his pleas and went to fry plantain as Neo’s pleas for her to come back as his girlfriend fell to deaf ears.