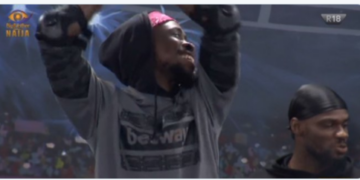 Trikytee and Head of House

Trikytee has won the Head of House seat and has not become the 8th head of house in the BBNiaja lockdown house . The ever keenly contested seat who juicy previedges returned this week with five major and dangerous hurdles to overcome.

The die-rolling game is arguably the toughest and most sought for the housemates because whoever wins it, gets to automatically escape the week’s eviction process among many other privileges.

The Head of House also gets to live in an exclusive lounge with whoever is picked as Deputy HoH. Meanwhile, The HoH gets to pick whosoever he feels comfortable being and sleeping with because they would be mandated to sleep on the same bed for a whole week.

Another twist to picking the Deputy HoH is that the person must be of the opposite sex, and that has been the tradition since the second Head of House emerged. But this week the game changed and he was told to pick anyone he feels because of the reduced number of housemates.

For this edition of the game, Laycon was the first to play and he ended his game on spot 16 and followed by Dorothy who finished the game at spot 30. Then Prince played and stopped on spot 18, which is the furthest he has gone into the game since he got to the BBNaija house.

At that point, he had just eight seconds left and needed to roll figure 5 to finish the game, as luck will have it, he rolled figure 5 and finished the game before his two minutes given to them.

At the end of the second round, Trikytee went the furthest and was crowned HoH, he then was asked to pick his Deputy immediately and he chose Laycon. Therefore, Trikytee and Laycon would not be up for eviction for this week.

BBNaija 2020: Details of Week 8 Nomination For Possible Eviction Next Week