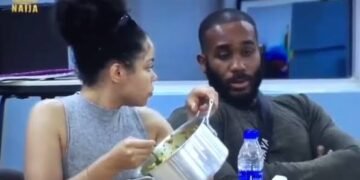 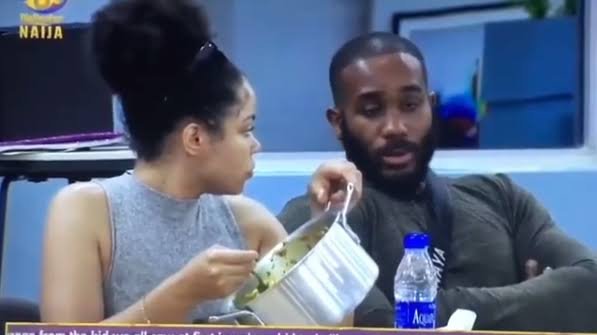 Ebuka never comes to the live eviction show without his table shaking element.

The Big Brother Naija team promised us a shake-up live eviction and BBNaija 2020 host, Ebuka Obi-Uchendu delivered just that. From the stern warning given by Biggie to Kiddwaya and Erica to the intense table shaking and historic triple eviction, the housemates and viewers were indeed shaken up.

Before the first eviction, Ebuka brought up the situations between Ozo, Nengi and Kiddwaya. In his usual fashion, he asks other parties what they think of the matter tabled and they react.

This time he asked Trikytee if he felt there was a distraction to the well known Ozo and Nengi’s relationship which was indeed a tricky question. Trikytee said he didn’t really see a threatening distraction but he noticed that Nengi was getting close to Neo in a certain way. This drew reactions from the other housemates because it is public knowledge that Neo is in a relationship with another female housemate Vee and they could not connect the dots.

Not getting the answer he hoped for, Ebuka decided to take another route. He asked Trikytee directly if he thinks Kiddwaya is a distraction to Ozo and Nengi’s relationship. Trikytee said that he does necessarily think Kiddwaya was a distraction and according to him ‘Kiddwaya was just being Kiddwaya’

We all know that where ever there is smoke there must be a fire close by and Ebuka does not ask questions that have no originating conversation. There have been speculations of Nengi and Kiddwaya having the hots for themselves despite being with other people. The zip situation last night where Ozo claims he caught Nengi and Kiddwaya in a compromising position with her zip down may have even prompted this line of questioning from Ebuka. Although both Nenhi and Ozo kept this issue under wraps, Ebuka had plans of exposing this secret triangle.

Prior to last night, Nengi had also admitted that Kiddwaya is the only one that matches her energy in the house.

Could there be a secret affair between Nengi and Kiddwaya or is it just a platonic relationship? Is Ebuka digging where there is no gold? We will definitely find out as events unfold.