Ubi Franklin fights dirty with his baby mamas. The media and talent management guru has been caught up in some fatherhood responsibilities fight with two of his baby mamas. So, it all started with his birthday message to his son, Shiloh. Shiloh was born in April 2019 by his South African girlfriend, Nicola Siya.

However, that did not go down well with Nicola, Shiloh’s mother as she responded saying that one does not be a father from a distance. She went further to call him a deadbeat father while reminding him that you do not raise a child on social media.

Well, knowing Ubi, he was not going to let that slide so he responded. In his response, Ubi Franklin wanted his son to know that he loves him and is still going to be there for him for as long as he lives. He made reference to how he has never defaulted in catering for the boy sine his birth until date and that he will never default.

However, in the downside of the message, he regretted not spending adequate time with him physically which is mostly because of his work.

Here is what he says,

I’m glad to proudly say that I have never missed out on sending money to my son, Shiloh for his upkeep. I will never deny any of my children. Offcourse I have made my mistakes in life but none of my children is a mistake and I owe them all that duty as a father,”

l love my children and even though distance may sometimes hinder my physical presence as I can’t be with them 24/7 due to circumstances beyond me due to work etc, I have ensured never to neglect as a father to them. I love you all, nothing will ever change that. And I will always continue my duty as a father as long as I live.”

“Shiloh just so you know that daddy has been there for you since you were in the womb, when you were born, still this day. I made sure you were born in one of the best hospitals in SA without minding how much money I had because, to me, you and your siblings are all priceless. I love you kids.”

Well, after what seemed like a first phase of the fight, his other baby mama, Sandra Iheuwa responded to Nicola. According to Sandra, Ubi has not been able to visit his son in South Africa because of the Xenophobic attacks going on in the country. She added that the coronavirus has also impacted travels and as such Ubi should not be blamed for not visiting.

This made Nicola to ask if Xenophobic attacks and coronavirus have been going on at all times since April 2019.

Recall that Ubi Franklin was married to the Nigerian actress Lilian Esoro with who he had a son before she filed for a divorce. So far, Ubi has gone ahead to have three more kids with various women of which Sandra is the third and Nicola is the fourth of them. 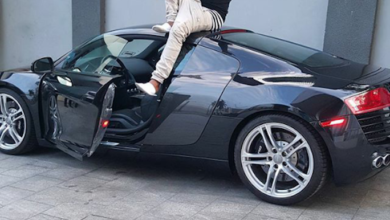