A 19-year-old has given birth to a healthy baby girl despite not knowing that she was pregnant until 45 minutes before the birth.

Emmalouise Leggate went to sleep as she normally would, but when she woke up she noticed that she had a bump on her stomach.

She delivered the baby in the hospital car park, on her way to see a doctor.

She had no idea she was pregnant and was even taking contraceptive pills at the time. Her stomach was flat too until right before she gave birth.

The baby, Ciara Louise Lamont, was full term at the time of her birth but had been positioned further towards the teenager’s back, rather than at the front. That’s how she didn’t notice that she was pregnant.

Her grandma, 63 year old Louise Ford, rushed her off to the hospital, but the labour was over so quickly that they never actually made it into the building.

The good news is that the baby  was born healthy and weighing 7lbs 12oz.

She is Emmalouise’s second child following one year old Caoimhe.

She said, “It was the best thing that could have happened. But we’re having no more. No more surprise babies, thank you. It’s changed the way I think about contraception. I ended up going on the coil just after Ciara. I’m safe just now. I take pregnancy tests nowadays too just in case.”

Coronavirus in Nigeria: Still Thinking of Getting Pregnant?

Choose Abortion, It Is A Lesser Sin

The Leading Causes of Prenatal Depression

Judge Orders Woman To Have An Abortion Despite Objections

Coronavirus in Nigeria: Still Thinking of Getting Pregnant?

Choose Abortion, It Is A Lesser Sin

The Leading Causes of Prenatal Depression

Judge Orders Woman To Have An Abortion Despite Objections

The Nigerian Woman is Homeless

Bring Back Our Girls: Chibok, 6 years After Attack

Coronavirus In Nigeria: You Can Sue Your State Governor for Attempted Murder 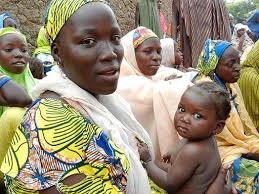