The 2018 housemate, Angel Ifieme Awotargha simple known as Angel was seen in a video with a lady he tagged as a police officer.

Angel captured and shared this video on his Instagram page to alert his followers of impending danger to his life.

According to Angel, the lady captured in the video was a police officer who had a hand in his mother’s death and his father’s incapacitation.

He identified the woman as Kate Ogbe, an officer from the mile one police station Port Harcourt.

In this video, Angel claimed she attacked him as he showed the torn bits of his shirt while bystanders were trying to separate them.

The lady also made an attempt to pick a weapon which Angel made mention of.

Ready to fight, the police officer made several attempts to attack Angel but the peacemakers got in her way.

Speaking in the video;

The lady charged at him and when people tried to stop her, he responded.

“Leave her! leave her !! if they born her well. See her, see her she wants to fight me, Nigerian police.” 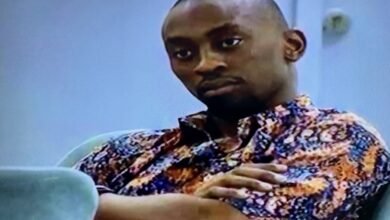