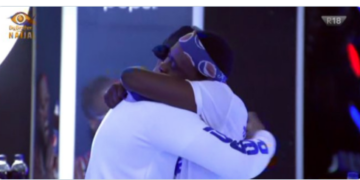 Ozo ans Trikytee have both won themselves a huge prize after their musical presentation in a sponsored task taken part by the seven teams in the house. They won themselves a million naira each and an all expense paid trip to Dubai for the one test music festival.

They also got themselves a year supply of drinks provided by the soft drink company that sponsored the task for the day.

The housemates were given a task earlier today and it involved seven Nigerian artists. The BBNaija 2020 lockdown housemates were divided into seven groups through a lucky box and card picking process.

After they picked the cards, Trikytee and Ozo were in the same group while, Prince and Nengi, Brighto and Dorathy, Laycon and Wathoni, Lucy and Kiddwaya, Neo and Erica, and Vee and Tolanibaj also were paired up.

Their first task was to arrange a puzzle that has the faces of Nigerian artists on them while some parts of the puzzles were hidden somewhere in the arena. Also, the first group to finish arranging the puzzle would be the winner of the first phase.

After the arrangements, Trikytee and Ozo  got Techno’s face, Prince and Nengi that of Tiwa Savage,  Brighto and Dorathy’s was Davido.

The names of the artists gotten by the teams became the name of their groups and team Tiwa Savage finished arranging the puzzle and became the winner of the first stage.

After this they were asked to prepare a singing performance for s song of the artist their group represents. They were given a song and a printout of the lyrics they would need in their performance.

Their rehearsals were intense and filled with intense concentration which took about four hours. Trikytee was the anchor of their song presentations  and they were scenes to behold.

At the end Ozo and Trikytee were declared the winner and was given the sun of one million naira each as cash prize, but Nengi and Prince were given nothing for winning the first stage.