Some Nigerians have called out the Governor of the Central Bank of Nigeria, CBN, Godwin Emefiele.

They called him out following reports that the bank accounts of some EndSARS protesters were frozen.

In a trend on Twitter, they described the move as uncalled for and a misplaced priority.

They noted that Emefiele finds it hard to freeze the accounts of politicians who have stolen billions.

A Twitter user described the move as an Economic terrorism by the CBN.

@MrSomtoOkonkwo said “So, Godwin Emefiele Can Freeze Accounts Of EndSARS Protesters yet can’t freeze the Accounts Of those Sponsoring Bokoharam.

Okonkwo also wondered why the CBN could not freeze the account of Politicians Spearheading Corruption In Nigeria.

@henryshield said “Dear Godwin Emefiele, you blocked the bank accounts of #EndSARS protesters, We have heard you loud and clear

@o_kanyy said “If only Godwin Emefiele had used the energy he used in blocking the accounts of Endsars protesters to block accounts of Boko haram sponsors then I’m sure terrorism rate would have dropped by now.

Everyevery.ng had earlier reported that the Ministry of interior had distanced itself from the claims that it seized the Passports of some of those who led the protests. 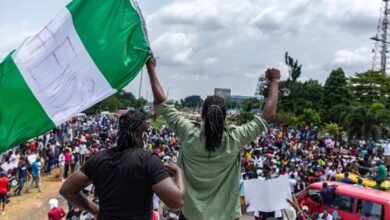