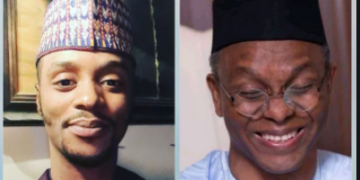 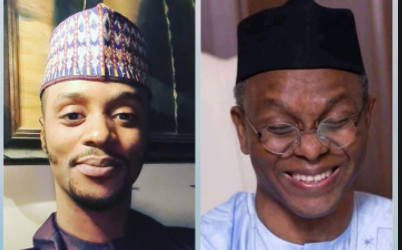 Muslims and Governor of Kaduna State, Nasiru El- Rufai’s son are currently trending. The governor’s son, Bashir El- Rufia is being dragged over his wedding pictures.

The newly married manis being roasted in hot pepper after he was accused of public display of affection.

Muslim faithful are against the way he posed in a picture with his new bride Halima Nwakaego Kazaure.

Pictures of Bashir El-Rufai and he wife on Twitter has unfortunately pinched him against some muslims folks.

Some of them who commented on his pictures claim his pose was against islamic conducts.

@soltan212: Openly going against the directives of Allah and His rasul won’t augur well in what you guys intend to do soon. You need Allah’s blessings in your home more than public applause of your deviation. May Allah set right our affairs.

@Abdul92598688: It seems many people are not religious sensitive. They fail to understand that marriage is an act of ibadat. And in ibadat, u do things that r in accordance wit d teachings of d prophet. I’m actually cross seeing the pix! Bt Allah yasa mudace, amin.”

Olivier Giroud Set to Break Remarkable Record as he scores 2