The situation seemed perfect for the alleged scammer who had successfully gotten a hundred thousand Naira from the comedian only to be bursted few hours later.

A Twitter user with handle @Muhbad11 made a tweet where he begged Nigerian Actor Odunlade Adekola for a washing machine to help his hustel.

“I’m doing laundry I need to buy washing machine please I need your help too please.”

Investigation shows that he had earlier sent same tweet at the comment section of the comedian’s tweet, where he requested that some of his fans drop hints about their businesses for possible patronage.

He wrote;“Hi guys. Please put your businesses under this tweet. Let’s help each other grow. I might be patronizing some as well. Love always”

After he made the request, Mr. Macaroni replied that he has a washing machine he is no longer using, asking him to come for it.

Apparently, @Muhbad11’s sent same tweet to Adekola but he got a shocking response when Mr. Macaroni stated that he just sent him a hundred thousand Naira for the washing machine he is requesting for a second time.

The comedian in his tweet accepted that he has been scammed by the social media user, but discouraged him from playing same stunt on Adekola.

“But I just sent u 100k for the same washing machine 4 hours ago…Oya u don scam me. I agree… but no use my picture scam others”

This situation has gotten several reactions from people who condemned that act, they tagged a discouragement for people who sincerely want to help people in need.

Odunlade Adekola Gushes Over His Height

Odunlade Adekola Gushes Over His Height 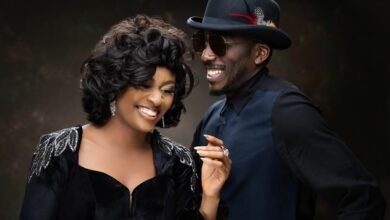