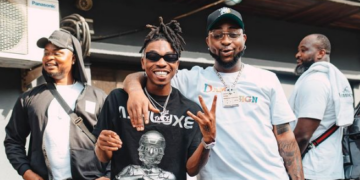 Mayorkun Is The Biggest Artiste Globally

David Adeleke popularly known as Davido in an interview said between him, Wizkid and Burnaboy, the real big deal is Mayorkun. The 27-year-old asserted that Mayorkun is the biggest artiste globally.

Davido was in an Instagram interview with a foreign media house talking about music in Nigeria especially from the perspective of an artiste who has been in the game for roughly a decade.
Towards the end of the live video, the host asked,

“We got Davido, Wizkid, Burnaboy, who is the bigger artiste globally in your opinion?”

One would expect that Davido would pick himself but he actually veered off and mentioned an artiste that was not a part of the interviewer’s list.
Much to the host’s surprise, Davido said,

This is coming just days after Davido declared himself the best artiste in Africa in an interview with Bolanale Olukanni.

This response stirred emotions among die-hard fans of the artiste mention with some saying the only reason Davido mentioned Mayorkun because he is Davido’s ghost writer and is responsible for all his big hits.