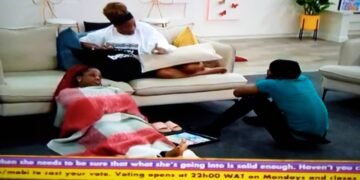 Lucy has denied recognizing both Dorathy and Prince as her friends after another hot argument that ensued in the BBNaija 2020 lockdown house on Thursday night.

Dorathy and Prince have not had a nice time with Lucy throughout today after they appeared not to pat her on the back when she had a disagreement with some housemates earlier in the day.

Another hot argument was witnessed in the house after Erica tried to settle the differences with her, but the peacekeeping meeting ended in a deadlock. She walked out of the room where the meeting was being held and she rested in the arena.

At the Arena, Kiddwaya and Erica were fitted at a corner where they had a couple moment and Kiddwaya decided to approach Lucy to give her a huge.

He said “come let me give you a huge” and she answered, “why”. The two of them got a surprise response from Erica who answered sating, “because everyone needs one once in a while.”

After Kiddwaya gave her a huge, Lucy said, “do you know that Kiddwaya is more my friend than Dorathy and Prince?”

The statement got a response from Erica who did not believe she was right to have denied the two of them as her friends. She said she was wrong to have thought that way because she is aware of how much they care about her.

Lucy, on the other hand, stressed that if they were her friends they would not behave the way they do. She also told Erica that Dorathy at a point told her that she would nominate her for eviction if she was up.

Though Erica believed that what Dorathy told Lucy was painful for a person to tell her friend, she still believes that Dorathy and Prince both care about her and she should see them as one.