The bad blood between BBNaija housemates, Laycon and Erica is one that may not be completely dissolved soon judging from how they left things at the Lockdown house.

Recall that while in the house, the beauty model has serious issues with the season’s winner, Laycon.

They initially started as friends but it quickly degenerated into hatred after Laycon revealed that Erica had tried to kiss him on several occasions even after she claimed not to be attracted to him.
The situation spiralled out of control leading to Erica’s disqualification .

Fans and lovers of Erica blamed her shortened stay in the house on Laycon claiming that he emotionally manipulated her to the point where she lost her cool.

Even though both parties claim that all is well between them, they have not been spotted relating with each other since the end of the show. Also, there has been periodic shade from both Erica and Laycon targetted at each other with the most recent being from Erica.

A Twitter user shared the meaning gaslighting which Erica and her friends claimed to be what happened between her and Laycon. The user wrote,

Retweenting this definition, Erica wrote, ‘This’ 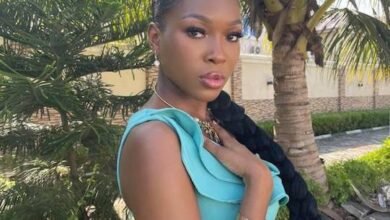