American singer, Trey Songs has called out Nigerian President Muhammadu Buhari and the Inspector General of Police on theEnd SARS Campaign. Responding to the President’s tweet on working hand in hand with the IGP to reform the police and his plan to end police brutality and unethical practices in the force, Trey said,

“The people saying you full of shit fam” 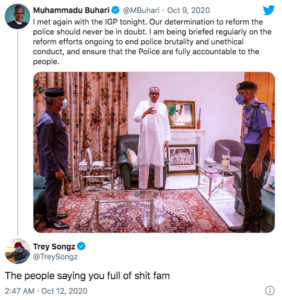 The 35-year-old soul singer joined in the fight for Nigerian lives days ago and has been actively involved in the virtual protest. After months of silence, the President, Muhammadu Buhari announced that he had given the IGP orders to conclusively address the concerns of Nigerians which led to the disbandment of the unit.

Following the dissolution of the SARS unit, Trey also made a tweet, commenting on the facade that the Police are putting up in light of the campaign. According to the singer, the actions of the Police force to ameliorate police brutality is ‘Bullshit’ as they are still going to reemploy the same officers who are constituting a nuisance to different departments.

Burna Boy Reveals How He Got ‘African Giant’ Name

Burna Boy Reveals How He Got ‘African Giant’ Name