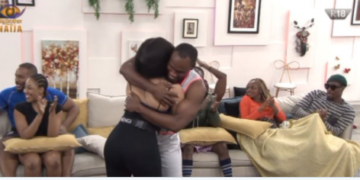 Nengi and Prince have both finally gotten a surprise gift after days of being disappointed for not getting any prize for winning a stage of a sponsored task they had last week.

They were asked to put together a puzzle as the first stage of a task sponsored by one of the drink sponsors of the BBNaija lockdown show and they were the first to complete the puzzle.

Biggie announced them as the winners as earlier announced that the first group to complete the puzzle, but they were disappointed when only the group that won the second phase of the task was rewarded.

Ozo and Trikytee were announced winners of the singing and dance presentation stage and were given two hundred and fifty thousand naira each and an all-expense paid trip to a musical concert in Dubai.

Yesterday, Biggie announced to them that they have also been rewarded for finishing first after feeding on their disappointment for about 5 days.

Meanwhile, Ekuba Obi-Uchendu has warned the housemates about feeling entitled to prizes from sponsors during the tasks given to them.

The housemates have complained several times of not getting the kind of prizes they desire or think they deserve for some tasks.

The housemates specifically complained about the Pepsi task after only one group was announced the winner of the task, with two housemates in the group winning a million naira each. They compared the task with the one they had the previous day where all the housemates got a bite of the prize.

However, Ebuka warned them to stop complaining about how the sponsors decide to share or award gifts and prizes.

He told them that the sponsors do not owe them anything and they are not to feel entitled to anything from them.