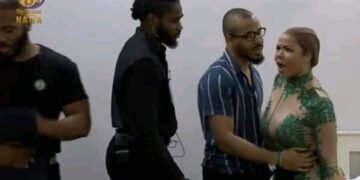 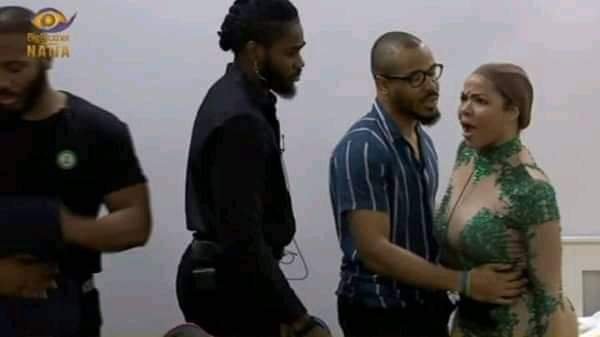 Lucy and Nengi fight in BBNaija 2020 house and it was not pretty.

The viewers have been clamouring for drama and today we got drama.
After Ebuka ruffled feathers during the BBNaija 2020 live show, the housemates got into an intense and extended fight.

Lucy and Nengi fight intensely and were on to each other’s necks. Let’s start from the beginning. So after the eviction show, Lucy went into the restroom and while she was there she rode off Ebuka’s statement talking about female housemates that were leading people on in the house.

Nengi overheard her and thought she was the topic of Lucy’s spiteful statement. In response to that, Nengi accosted Lucy in the restroom and warned her about talking behind her back. This was how it all started.

Both Lucy and Nengi went off, screaming at the top of their voices about the matter. Lucy said that she was not talking about Nengi and if she had anything to say to Nengi, she would say it in her presence. Nengi went on, calling Lucy an ‘amoeba and old woman’. Hmmm.

Lucy got upset and told Nengi that she lacked intelligence. In her words to Nengi,

“Simple intelligence you cannot display.. Yes, that’s all. Gutter behaviour left and right. He has to hold you like a handbag or you hold somebody as handbag or else you cannot exist”

All Nengi could say about that was’ act your age’ and Lucy retorted saying,
I behave my age. I talk to and advice people as an elder that I am. I don’t go around showing people my ass so they can pick me. That pick me mentality is not in me.

“I can do a PowerPoint presentation for you but I know you don’t even know what that means because your brain is not in use. You don’t use it, you probably just make it up and polish it nicely… Your complexion is brighter than your brain, bring your result let me bring out my own, rubbish”

Lucy did not just stop with lambasting Nengi, she also had a piece for Ozo. She told Ozo that it was possible that he was under the influence of black magic because that was the only reason he keeps following Nengi around even though it was obvious to every other BBNaija 2020 housemate that he was being used.

Lucy told Ozo that she had already warned Dorathy to avoid him because he had caused her enough embarrassment.

The other BBNaija 2020 housemates had to hold both fighting parties down as it was very close to becoming physical with both housemates ready to throw fists. Hmmm, this beef seems to have been brewing for a while.