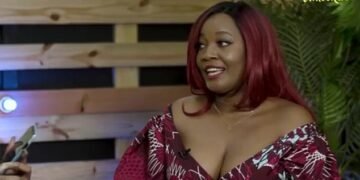 The housemates and viewers saw Lucy as an abrasive and sometimes troublesome housemate but now she is out, it seems that Lucy was just as great an instigator as Brighto was.

In her recent exclusive interview, she spoke about how she may have been the genesis of the continuous quarrels between Kiddwaya and Erica while in the Lockdown house.

While talking to her interviewer, she said that she had told Erica once in the garden that her relationship with Kiddwaya was boring too watch and as a viewer she’d rather see Nengi and Kiddwaya than Erica and Kiddwaya. Wow!

She also said that she didn’t believe Erica’s outburst was about Laycon. In her words,

“I don’t think it was about Laycon at all because it started at the party. She sees Nengi talking to Kidd and then she goes in between, backing Nengi and facing Kidd and talking, talking, talking. Next thing I see her talking to Nengi but I noticed that Nengi died the matter before even arose. Me, I already saw this fight coming.”

Talking about how she used Nengi to poison Kiddwaya and Erica’s love affair, she said,

“ I think I threw in a little bit of charcoal into the fire that was already dying when I told Erica that actually, I find Nengi and Kidd more interesting to watch than herself and Kiddwaya. We were in the garden so maybe it messed with her mind. I told her like a week ago”

“ I told her that because it is true, have you seen Nengi and Kidd play? It is just more fun to watch. So she was like she is entertaining, herself and Kidd and I’m like Nah, for me you guys are actually boring, what I’ll like to watch if I was a viewer would be Kidd and Nengi so she just kept quiet…”

When she said that the housemates underrated her she was not joking because what she said to Erica is enough to set anyone off and it most likely planted a bad seed about Kiddwaya’s relationship with Nengi in the house.

She finalised her interview by saying that she knew if Nengi wanted Kiddwaya she would have gotten him and Erica did not stand a chance against her. Do you agree with Lucy on this?