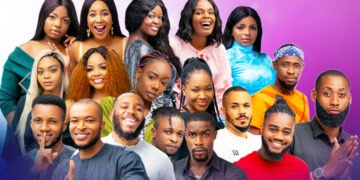 Aside from the Prize-win of N85 million, there are tons of other things to be won by the housemates. Praise and Erica won the mobile phone challenge.

Tacha from the pepperdem season paid a virtual visit to the housemates. She gave them instructions for their task. She is actually the first pepperdem housemate to directly address the current housemates.

Lucy and Erica seem to not agree on anything as they have had two roles of fight and arguments. Hopefully, they can understand each other better before they leave the house.

Watch the video and find out all the things that happened on the 24th day of the Bog Brother Naija. –

The housemates did a dancing chairs challenge to pick group members for their task. –

Nengi and Neo won the dancing chair game for the female and male segments. –

Tacha Addressed the Housemates and gave instructions for their daily task. –

The housemates played a game of Charade in pairs as their task. –

Praise had an outburst because Prince tried to change his line for the Wager Presentation. –

Lucy Fought Erica because Erica disregarded her suggestion for their wager presentation. –

Erica and Prince received 500k and Phone each for winning the task. –

Eric said Lilo was a distraction to him in the house.