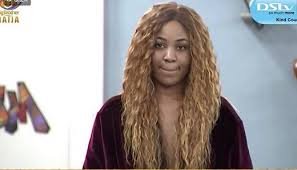 BBNaija 2020: Is Erica In Another Trouble?

BBNaija 2020: Is Erica In Another Trouble?

Erica sure loves dancing around danger as she risks being served a third strike which amounts to automatic disqualification in BBNaija 2020 house.

Probably stemming from the viewers’ unpopular opinion of the initial method, there has been a change as last night the housemates nominated two housemates that they would like to see leave the BBNaija Lockdown house while the viewers will vote to keep their favourite of the nominated housemates in the house.

Ozo was given the document to read out to his colleagues and while he was giving out the instructions for the nominations, Biggie categorically instructed the housemates not to discuss their nominations and campaign for votes or risk facing severe punishment.

The viewers, however, were clamouring for the disqualification of a female housemate, Erica with claims that she discussed her nominations with her almost-boyfriend Kiddwaya.

She was telling Kiddwaya who came up for nominations not to worry because her fans will surely vote for him knowing how important he is to her. Biggie is strongly against the contestants communicating to and about the fans in any way and some viewers are asking Biggie to take immediate action on Erica.

The roads of social media are ablaze with comments calling on Big brother to disqualify Erica because she had flouted too many rules. Some fans are even accusing the all-seeing Biggie of being bias to Kiddwaya and Erica. Do you think that Biggie is favouring any housemate?

Recall that Erica has received two strikes and a very strong warning for disrespecting Big brother and the viewers. Her first strike was from whispering to other housemates while the second was for overstaying her welcome in the Head of House lounge and finally she was warned for swearing at Biggie and the viewers. With all these in her records, Erica is now standing in the house with two and a half legs. we also dont know what decision Biggie might take on Sunday. Is Erica in another trouble with all these?

Longest-Reigning Monarch In Ebonyi Dies At 81