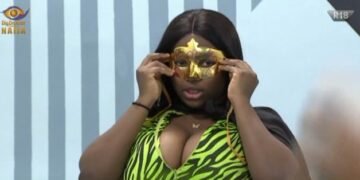 Dorathy on Friday morning has compared herself with Erica and finally announced that she can never be like her, especially the way she goes about her life and relationship in the BBNaija lockdown house.

She opened up to Laycon while she was talking about how Erica goes around the house with public display of affection with her boyfriend, Kiddwaya.

Dorathy who is one of the booless housemates in the BBNaija house said outside the house she is a calm person and she is used to helping others solve their relationship problems.

She said for her, engaging in sexual activities and displaying affection in the public like Erica is not an option. She also talked about her fears to fall in love.

“It’s always hard for me to love because I know when I do I love too much and end up hurting myself. I need to visit a therapist about my heart.”

Dorathy has had about two men issues in he house and it was definitely not fun. The first was with Ozo who was her best friend in the house until when he showed emotional interest in another female housemate, Nengi.

They struggled with their friendship, but they have been able to mend the cracks on their walls.

While she was recovering from that she got into a triangle with Wathoni and Prince, but unfortunately, Brighto chose Wathoni ver her, and just weeks into that he was evicted.

She is not stock with mere friendship in the house and for her life goes on.