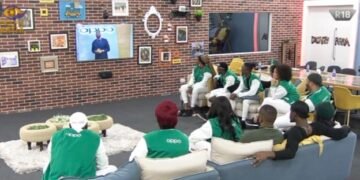 Biggie has not stopped amazing the BBNaija 2020 housemates, both in good and bad ways, but today’s surprise was in a good way.

The housemates were made to gather in the living room after finishing the day’s task, but they were not aware of what was about to happen until they saw a video been played for them.

The video clip literarily turned the house upside down when the began to see both strange and familiar faces giving them shout outs one after the other.

The faces showing were and addressing the housemates one after the other, but at a point, emotions skyrocketed in the house.

For Prince, he was expecting to see a strange face giving him a shout out, but the face that came up was that of his older brother who he has not been in talking terms with for a while.

Before he was able to tell them he was his brother, some of the housemates were already asking him who the guy was because of the resemblance. He told them the guy who showed up for him is his brother named Michael.

For Trikytee and Neo, their friends were the ones who showed up for them. The always energetic Neo screened the house down and almost rolling on the floor at the sight of his friend.

This is the second time the housemates would be getting a shout out from their fans, but this time it was different because this time some close pals and sibling showed up.