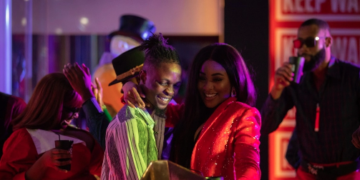 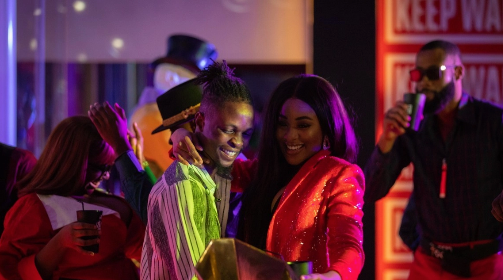 Erica has attacked Laycon after the finished the week seven Saturday night party, calling him names and turning the house to a rowdy place while the housemates were trying to put things in order.

During the party, Erica was seen talking into Laycon‘s ears and Dorathy went close to them and took Laycon away from the spot. At that point, the topic of discussion was not clear until when housemates finished the party and returned to the house.

Erica is angry because she asked Laycon to prove that she truly tried to kiss him, a revelation that Ebuka-Obi Uchedu, the show host told the whole house during one of the live eviction shows.

She got infuriated when he told him that he was not ready to talk about the topic. The war of words started when she told Kiddwaya and Prince that Vee and Laycon are her enemies in the BBNaija house and everybody is aware of that. Though Kiddwaya and Prince tried to see the two housemates as enemies, she insisted that she does not like them and they are not her friends.

Erica’s voice became louder when she told Laycon to stop playing the victim when he was the person who started the issue. She called him a liar for saying she tried to kiss him, adding that she only tried to kiss him once and that we when she was drunk.

The Nigerian actress and BBNaija 2020 housemate also called Laycon ugly, skinny, a fool, an idiot who she is not attracted to, and would never be attracted to. Erica maintained that Laycon is only trying to use her to trend because in her view he has not contributed anything to the show except to always mention her name at all times.

While the shouting and name-calling rounds were ongoing, Laycon walked out and found a place to seat without saying a word. At that point, Kiddwaya was trying to calm his girlfriend down, but it did not work.

Laycon however told Kiddwaya that he will not do anything that would put after Erica had been taken to the Head of House lounge. He maintained that he would not talk to her about the kissing issue until he is sure that she is in a good mood and would be able to treat the information well.