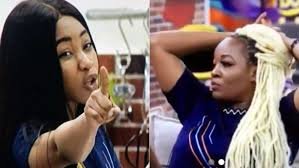 The beef between Erica and Lucy is far from over and they showed that today while rehearsing for the wager. Shortly after fellow BBNaija 2020 housemates Prince and Praise had their issues, Erica and Lucy clashed too.

This second phase their quarrel started when Lucy raised a point about writing their points on and carrying cardboards while presenting the campaign against rape tomorrow.

While making this suggestion, Erica interjected and said “Let us continue” , totally disregarding what Lucy was trying to say and Lucy, as expected, felt slighted by this.

Not one to hide her feelings, Lucy called Erica out on that, asking if her contribution does not matter in the wager.
Both ladies exchanged words for a while and obviously upset and irritated, Lucy just asked God to help her survive in the house.

Wathoni took Lucy’s side on this and told Erica that what she did was wrong. According to Wathoni, she(Erica) should listen to everybody’s contribution even if she didn’t like the housemate contributing.

Despite being called out, Erica did not apologise to Lucy rather she made an excuse saying that the reason she cut Lucy off was that the idea was not new and they had already made plans to write on cardboards for the campaign tomorrow.

A short apology would have sufficed Erica, don’t you think so?

Erica and Lucy may have more issues in the future because the one sthey have had were left unresolved and remember the saying about a woman scorned? Imagine two women scorned.