Adesua Etomi-Wellington, the actress wife of popular singer, Banky W has taken to social media to tell about her pregnancy to delivery experience.

Recall that the couple announced the birth of their first child together, Zaiah, four weeks after his delivery. Read More

The excited mom has now shared lovely pictures on her official Instagram page to give curious fans a peek into what her pregnancy journey looked like.

In the first picture, she described how she had to wear a maternity belt because of pains (pelvic, waist and back pain).

In the second picture, she wrote, “feeling myself after my hospital appointment but also exhausted (Quarter to drop“

The cute third photo shows Adesua in her natural hair which was 2 days before the delivery of her son.

The fourth slide captured the father, Banky W staring at Zaiah in amazement few minutes after her delivery.

Adesua then showed the new born baby after the delivery and while on a walk with Zaiah.

Adesua Etomi got married to music star, Banky W in February 2017. The couple held their traditional marriage on 19 November, court wedding on 20 November and white wedding on 25 November 2017; the latter ceremony was held in Cape Town, South Africa. 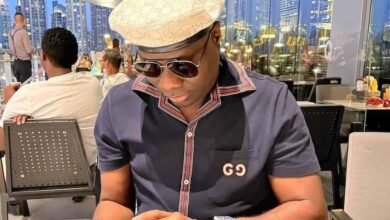 Mompha Cries Out After Hushpuppi’s Confessions

Toke Makinwa Knocks Down a Fan on Social Media

Nkechi Blessing In Trouble Over Comment About BBNaija Housemate