Laycon has landed himself another deal, and this time it is a partnership deal with Jumia. He has even said that some icons will be surprised. Hurry over to Laycon’s Twitter page now!

The whole mess about Ka3na and a fan who tattooed her name on her skin continues and Ka3na has received a lot of backlash for it. Actress Ada Ameh has called Ka3na stupid for what she did and Kelly Hansom has told Ka3na to apologize to the fan.

In the latest twist, the fan who tattooed Ka3na’s name on her arm has been reported to have attempted suicide. Ka3na on the other hand thinks it was all staged. The entire situation is a real mess.

Kaisha celebrated her 25th birthday yesterday and we got to know that Erica attended the birthday party! It was good to see them both hugging each other and looking all nice.

Yet another fan has caught Bobrisky’s attention after tattooing his name on her arm. Bobrisky has said that he would like to reach her and requested for her contact.

Kate Henshaw has also gotten caught in the whole tattoo drama after a fan tattooed her name and then made a list of things that he would like in return. Really funny stuff.

Vee expressed her love for Flavour’s music. She spoke about how much she loves his music and would even like to learn Igbo so she can connect better with his songs.

Wathoni Anyansi shared her life story of how she struggled a lot about two years ago in her business before she was able to find fame. really touching stuff, and also encouraging, too.

Banky W has revealed the meaning of the name of their son. Really interesting name and interesting meaning as well. Find out the name and what it means in the video. *wink*

Sheikh Gumi has said that we should stop calling bandits criminals if we want them to surrender. Makes me wonder what we should call them, then.

The Minister of Health, Dr Osagie Ehanire has said that there is no arrival date set for the vaccines coming into Nigeria. This is after we had been told other things about when we should be expecting the vaccines. Please #GiveUsOurVaccines

The Nigerian Army has now contradicted itself over what they said regarding the unrest in Orlu, Imo State. After denying presence there, they have now claimed that they lost 4 men in the unrest.

RMD has been caught in a cheating scandal after an Instagram blog claimed to have some evidence on his clandestine activities with a certain Chioma Iluomunanya. Now this one is very serious.

The Johnson and Johnson company is set to roll out its single-dose vaccine. This one is highly anticipated as it will eliminate the hassles faced with giving out double doses.

Liverpool goalkeeper, Alisson Becker, has lost his father after his body was found to have drowned in a lake in Brazil. Deepest condolences to Alisson and his family. 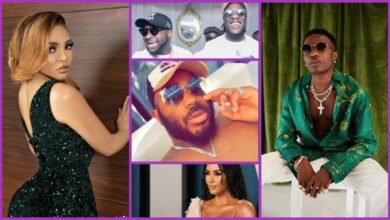