The court sittings held in different jurisdictions of the state between Monday and Tuesday has seen five internet fraudsters ‘Yahoo Boys’ convicted for Cyber fraud before two high court justice in Ilorin.

Adeniyi Samson, Akinola Kasumu, Ezekuse Somtochukwu, Ibrahim Mobolaji and Nwadei Oluwapelumi were all prosecuted on two-count charge except for Kasumu, who was tried alone in Court.

Samson, Somtochukwu and Oluwapelumi were found guilty on each of the two counts charged against them and were sentenced to six months imprisonment on each count, to run concurrently.

Samson, a 300L University Student, would have a suspended sentence but would forfeit $300, which is the product of the crime against the Federal Government.

Furthermore, the judge ordered the forfeiture of Somtochukwu’s iPhone 11, which was used to perpetrate the crime.

While Oluwapelumi would forfeit his iPhone 11 and the Dell Laptop used to defraud the Federal Government the sum of $170 (One Hundred Seventy USD), he benefited from the crime too.

The offence is punishable under Section 22 of the Cybercrime Prohibition Act, 2015.

21-year-old Fuad from Kwara State was one of the 30 suspected internet fraudsters arrested at Unilorin gate Hostel on May 4, 2021, during an operation by the Ilorin Zonal Command of the EFCC.

The 400L Plant Biology student of the Unilorin presented himself as Rick Ross to deceive victims.

Furthermore, Adepoju from Ekiti State was accused of using the identity of Kelvin Montalvo while presenting himself as a military and a gym instructor living in California.

Upon arraignment, Fuad and Adepoju pleaded guilty to the charge against them.

Following the plea of guilty, Justice Sani sentenced Fuad to six months imprisonment on each count, to run concurrently with N200,000 option of fine on each of the two counts.

In addition, Court also ordered the forfeiture of the iPhone XR used as an instrument of the crime to the Federal Government.

In the same vein, Justice Sani sentenced Adepoju to one-year imprisonment with N300,000 option of fine.

According to the judge, the convict would forfeit the HP Laptop and Tecno Spark 4 phone used to perpetrate the crime to the Federal Government.

Uche Odoputa Reveals Time his Father’s Been in Captivity 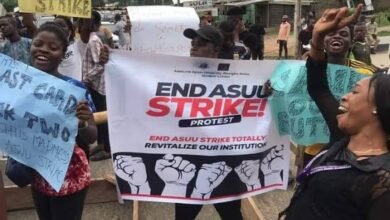